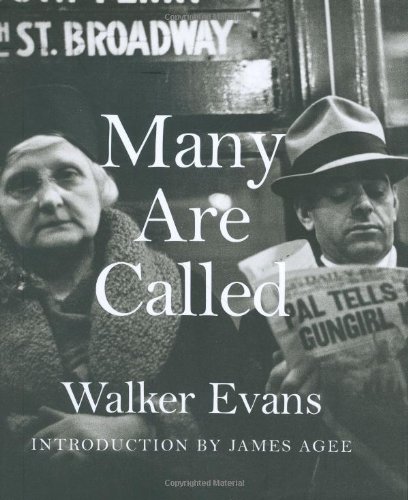 Many are Called (Metropolitan Museum of Art) por Walker Evans

Titulo del libro: Many are Called (Metropolitan Museum of Art)

Walker Evans con Many are Called (Metropolitan Museum of Art)

Críticas ""Yale University Press's reissue of the book, along with its original poetic introduction by James Agee, represents the first proper introduction of Evans's subway work to a broad audience and a full reintegraton of the photos into the arc of his career. It is hard to imagine a better way to celebrate the subway's centennial or to reconsider Evans, one of the 20th century's most influential photographers and artists.""--Randy Kennedy, New York Times Book Review ""Finally, today we have a re-issue of Many Are Called. It is truly a labor of love. This book is true to the look, feel, and spirit of the original. It does have a different cover, but includes a photograph of the original cover for reference. Two new texts have been added to the book. Luc Sante, the excellent writer and interpreter of photography, writes the foreword, while Jeffrey Rosenheim, the steward of this project, writes a historical sketch as an afterword. The pictures are reproduced in the same sequence as the original, and the reproductions, varnished duotones, rival the quality of the silver gelatin originals. Each plate is keyed to its date and Metropolitan Museum of Art accession number. The reproductions and the book itself are slightly enlarged in comparison with the first edition. Many Are Called has been issued only in hardcover. It is one of the more important books of the 20th century.""--photo-eye Reseña del editor Between 1936 and 1941 Walker Evans and James Agee collaborated on one of the most provocative books in American literature, Let Us Now Praise Famous Men (1941). While at work on this book, the two also conceived another less well-known but equally important book project entitled Many Are Called. This three-year photographic study of subway passengers made with a hidden camera was first published in 1966, with an introduction written by Agee in 1940. Long out of print, Many Are Called is now being reissued with a new foreword and afterword and with exquisitely reproduced images from newly prepared digital scans. Many Are Called came to fruition at a slow pace. In 1938, Walker Evans began surreptitiously photographing people on the New York City subway. With his camera hidden in his coat - the lens peeking through a buttonhole - he captured the faces of riders hurtling through the dark tunnels, wrapped in their own private thoughts. By 1940-41, Evans had made over six hundred photographs and had begun to edit the series. The book remained unpublished until 1966 when The Museum of Modern Art mounted an exhibition of Evans's subway portraits. This beautiful new edition - published in the centenary year of the NYC subway - is an essential book for all admirers of Evans's unparalleled photographs, Agee's elegant prose, and the great City of New York. Ver Descripción del producto
Libros Relacionados